At once the coachman whirled his little team out from the small room in the rock, and the coach took its place between the rails of the Golden Ladder, which now seemed to resemble the rails of a railroad. They were headed straight down, and Zuzu and Lulu caught their breath as the coach dived off and began to drop as fast as lightning, down and down. But hardly had this flight begun before, to their great surprise, both lost their fear of falling, and, indeed, forgot that they were going in any direction except straight ahead.

They flew on and on, as fast as a bird and as easily, the bumblebee horses galloping steadily without stopping to draw a breath, the coachman flirting his whip now and then, and the footman sitting up very straight and stern. The Enchanted Banjo now looked perfectly happy.

“In this way, my friends,” it remarked, “we shall soon be at the edge of the Valley of the Fairies. Had you stopped to climb down that Ladder, there is no telling how long it would have taken you. It might have been several years, and, indeed, for all I know, you might have been old persons by the time you got there, and so have had trouble about getting into the Valley; for every one knows that children are more loved by the Fairies than old people.”

“How long will it take to get there now?” asked Lulu.

“That is a hard question to answer,” replied the Enchanted Banjo, “but I will sing a little in order to pass away the time.” And so the Banjo sang:

THE CRAB AND THE LOBSTER

“We are now in a land where things are not measured as they are in your world,” said the Banjo. “You saw how easily you got into this small coach, did you not? Its measurement is not the same as that of a coach up there,” and it pointed directly above. “In the same way, the time will be much smaller than the same length of time would be where we came from. I don’t think the journey will tire you in the least, but it may, perhaps, be a sensible thing for you to curl up on the seats and take a little nap.”

“That is so,” remarked Lulu. “I am feeling rather sleepy.”

So they both curled up on the seats and went fast asleep. 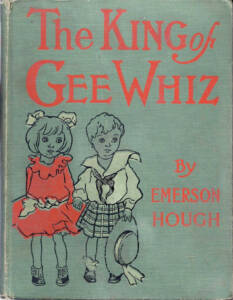