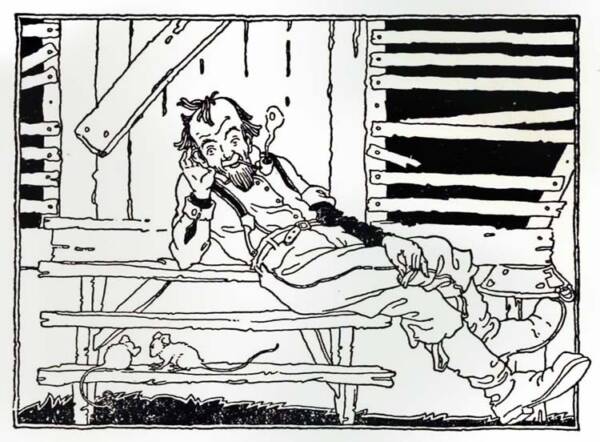 There is an old man with wrinkles like wrinkled leather on his face living among the cornfields on the rolling prairie near the Shampoo River.

His name is John Jack Johannes Hummadummaduffer. His cronies and the people who know him call him Feed Box.

His daughter is a cornfield girl with hair shining the way cornsilk shines when the corn is ripe in the fall time. The tassels of cornsilk hang down and blow in the wind with a rusty dark gold, and they seem to get mixed with her hair. Her name is Eva Evelyn Evangeline Hummadummaduffer. And her chums and the people who know her call her Sky Blue.

The eleventh month, November, comes every year to the corn belt on that rolling prairie. The wagons bring the corn from the fields in the harvest days and the cracks in the corncribs shine with the yellow and gold of the corn.

The harvest moon comes, too. They say it stacks sheaves of the November gold moonshine into gold cornshocks on the sky. So they say.

On those mornings in November that time of the year, the old man they call Feed Box sits where the sun shines against the boards of a corncrib.

The girl they call Sky Blue, even though her name is Eva Evelyn Evangeline Hummadummaduffer, she comes along one November morning. Her father is sitting in the sun with his back against a corncrib. And he tells her he always sits there every year listening to the mice in the cornfields getting ready to move into the big farmhouse.

“When the frost comes and the corn is husked and put in the corncribs, the fields are cleaned and the cold nights come. Papa mouse and mama mouse tell the little ones it is time to sneak into the cellar and the garret and the attic of the farmhouse,” said Feed Box to Sky Blue.

“I am listening,” she said, “and I can hear the papa mouse and the mama mouse telling the little ones how they will find rags and paper and wool and splinters and shavings and hair, and they will make warm nests for the winter in the big farmhouse—if no kits, cats nor kittycats get them.”

The old man, Feed Box, rubbed his back and his shoulders against the boards of the corncrib and washed his hands almost as if he might be washing them in the gold of the autumn sunshine. Then he told this happening:

This time of the year, when the mouse in the field whispers so I can hear him, I remember one November when I was a boy.

That second night I came to a haystack where a yellow and gold cricket was singing. And he was singing the same songs the crickets sing in the haystacks back home where the Hummadummaduffers raise hay and corn, in the corn belt near the Shampoo River.

And he told me, this cricket did, he told me when he listened soft if everything was still in the grass and the sky, he could hear golden crickets singing in the cornshocks the harvest moon had stacked in the sky.

I went to sleep listening to the singing of the yellow and gold crickets in that haystack. It was early in the morning, long before daylight, I guess, the two of us went on a trip away from the haystack.

We took a trip. The yellow and gold cricket led the way. “It is the call of the harvest moon,” he said to me in a singing whisper. “We are going up to the moon towns where the harvest moon stacks the cornshocks on the sky.”

And that was all we saw up among the moon towns of Half Moon, Baby Moon and Silver Moon. We had to get back to the haystack so as to get up in the morning after our night sleep.

“This time of the year I always remember that November,” said the old man, Feed Box, to his daughter, Sky Blue. 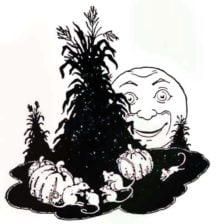 And Sky Blue said, “I am going to sleep in a haystack sometime in November just to see if a yellow and gold cricket will come with a singing whisper and take me on a trip to where the doorbells are on the windows and the chimneys climb down and dance.”

The old man murmured, “Don’t forget the cellars tired of being under, always under.”